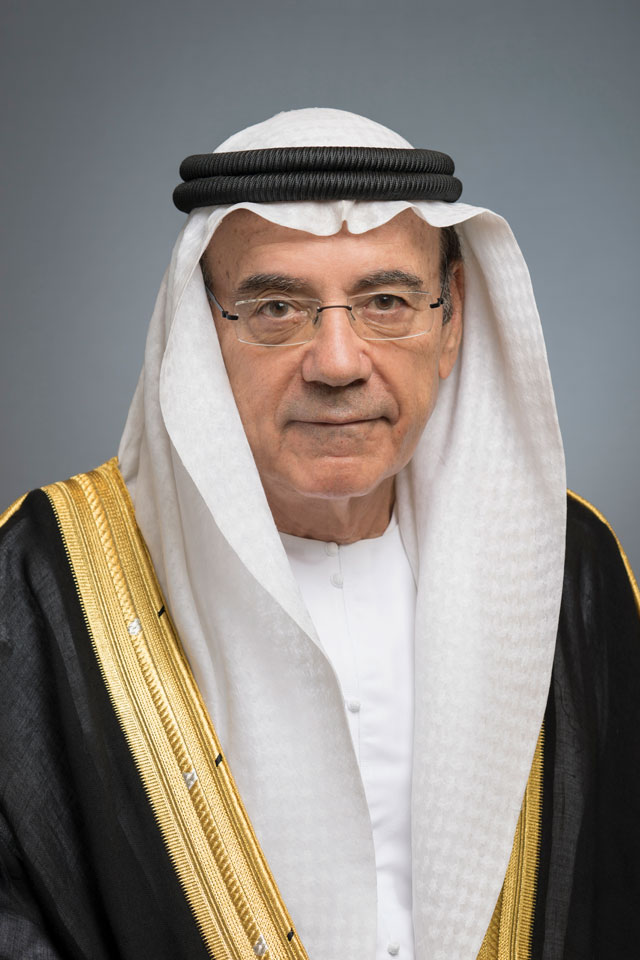 He received his primary education in the city of Jerusalem and his secondary and higher education in England, where he graduated from the University of Cambridge with a Master’s degree in Economics. He settled in Abu Dhabi in 1967 and started his career as a journalist writing for several Arabic and European news-agencies and papers reporting on the historic events associated with Sheikh Zayed’s accession to power and with the establishment of the United Arab Emirates under his leadership, witnessing at close hand Sheikh Zayed’s historic achievements in laying the foundations for his country’s future stability, security and prosperity in a period of great uncertainty in the region associated with British withdrawal from the Gulf.

During his work there Mr. Nusseibeh helped in the translation and publication of the early historic research carried out by Dr Morsi Abdulla on the tribes and history of Abu Dhabi. He also edited the first English newspaper to be published by the Abu Dhabi Government (Abu Dhabi Times) and participated in establishing its first Arabic newspaper (Al Itihad). He worked during his time at the Ministry of Information as a broadcaster and program producer in English and generally took part in the planning and development of Information and media strategy for the Government.

Mr. Nusseibeh also took part in preparing, editing and translating all the books and publications of the Department-subsequently the Ministry- of Information, attended a number of International conferences and meetings on behalf of the Government and prepared daily briefs for senior Government executives. He accompanied HH the President on all his overseas official visits working both as his personal interpreter and preparing media coverage and executive briefs for those visits. In addition, Mr. Nusseibeh also acted as a State interpreter for senior Government officials that included the Prime Minister and his deputy, the Foreign Minister, and the Presidential Chamberlain during official talks with foreign Governments.

In 1975, Mr. Nusseibeh was attached directly to the Diwan of HH the President as Director of Information and later on as the Press Advisor. He also took part in the Diwan’s strategy planning and crisis monitoring and prepared executive briefs for the President and for Government leaders. He also edited and scripted official Presidential press releases and policy speeches and letters.

In January 2006, Mr. Nusseibeh was appointed as Deputy Chairman of the Abu Dhabi Culture and Heritage Authority, where he participates in strategy planning and in supervising its activities and is directly involved in the implementation of a number of its cultural programs. He is also a member of the Permanent Higher Executive Committee of the Sheikh Zayed Book Award. He was subsequently Member of the Board of the Culture and Tourism Authority in Abu Dhabi.

Mr. Nusseibeh was also a member of the Board of Directors of the Abu Dhabi Center for Documentation and Research, where he participated in the discussions of the center’s overall strategy and in developing its different programs.

Mr. Nusseibeh was also appointed as a member of the Board of Directors of the Paris-Sorbonne University Abu Dhabi, which he helped to establish in 2006 and is directly involved in its management.

He was also a member of the Board of Directors of the Emirates National School.

Mr. Nusseibeh is involved in a number of community activities. He was the President of the Abu Dhabi Classical Concert Committee, which he helped establish as a voluntary association in 1995 under the patronage of HH Sheikh Abdullah Bin Zayed Al Nahyan to promote and present world-class classical music concerts in the capital city of Abu Dhabi.

He has also contributed in founding the Al Ain Classical Music Festival in 2000 as an annual event held in March of every year to provide classical music lovers an opportunity to attend performances presented by internationally renown orchestras in the scenic setting of the oasis city of Al Ain while organizing for them programmed tours of the area’s rich cultural heritage.

Mr. Nusseibeh is also the founding President of Abu Dhabi’s branch of the international ‘Friends of Richard Wagner’ society under the patronage of HH Sheikh Abdullah bin Zayed Al Nahyan, the only one in the Arab world.

He is a life member of the Emirates Natural History Society, and was President of the Alliance Française of Abu Dhabi since 1976, a non-profit French cultural organization which promotes French language and culture in Abu Dhabi and teaches Arabic to foreigners.

He sits on the Board of a number of international councils including the Agha Khan Museum in Toronto, the Institut du monde arabe in Paris, the Wagner Frienship Society in Leipzig, and was Chairman of the Advisory Board of the LSE Middle East Centre.

Mr. Nusseibeh has also published translations of Gulf and Arab poetry into European languages as well as numerous articles and studies in local, Arabic and international newspapers and journals.

His languages include, in addition to Arabic, English, French, German, Italian, and Spanish as well as some Russian.

He has received a number of prestigious Arab and International Awards that include:

Officer of the Jordanian music, especially the Opera